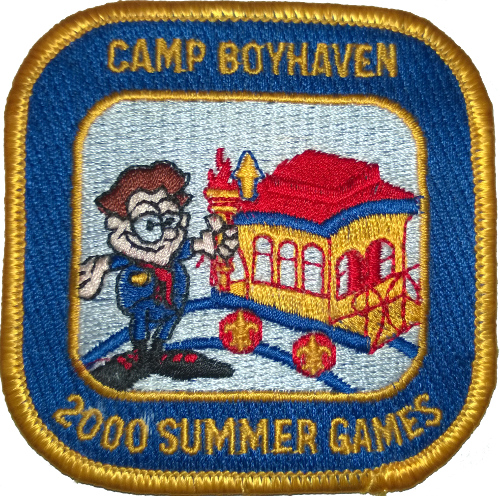 My first post here will be about the first ghost story I heard on my first trip to Boy Scout summer camp. It scared all of us.

It was my first year at Summer Camp as a first-year Webelos at Camp Boyhaven. It was nighttime and we were around the camp fire. One of the assistant scoutmasters then told us the story that would cause us to not sleep that night. That story was the story of the Boyhaven Creeper.

Many years ago when the camp first opened, there was a trolley that traversed the camp. It was a way for the scouts to get around the camp quickly. It’s also the reason why the camp’s mascot is a trolley. When we were Webelos, there was no trolley in the camp. The trolley was taken out due to a terrible tragedy.

One day, a boy was walking down the trolley tracks to get to his next program area. He was alone. For some reason or another, he did not hear the Trolley coming behind him and was hit. The trolley driver stopped the trolley as fast as he could and rushed over to the scene of the accident. However, he only found the boy’s legs. The boy’s torso was nowhere to be found. The staff and the authorities looked everywhere nearby for the upper half of the boy’s body but had no luck. Night was falling and they decided to start again in the morning. The police took the boy’s legs away, never to be seen again.

At a nearby campsite, some scouts decided to stay up late. The curfew breakers were in the woods behind their campsite when they heard a dragging, like someone was dragging a sack of potatoes on the ground. They looked down and saw him-the boy who was hit by the trolley-dragging himself by his arms.

“MY LEGS! WHERE ARE MY LEGS!” growled the torso. With glowing red eyes, he stared at the first boy who was frozen in fear. The torso dragged itself over to the boy and grabbed the boy’s legs. With demonic strength, the torso ripped the legs off the boy, who started to scream in agony. The torso then tried the legs on itself to see if they would fit. They did not. It chased after the other two boys who started to run away. Unfortunately, one boy tripped and sprained his ankle. Unable to move, he heard the dragging sound, and suddenly felt a powerful tug rip his legs off. The torso did not like the way those legs fit either. However, morning was coming so it disappeared into the night. The last boy made it back to the campsite to get help for his fallen comrades. It is unknown what became of the two victims.

The torso demon became known as the Boyhaven Creeper. Late at night, it drags its legless body around looking for a new pair of legs to try on hoping to walk again one day.

So scouts, if you decide to stay up late one night, leave the campsite, and you hear a dragging sound…

It might just be the last time you use your legs.

This story scared us scouts. It explained the camp’s strange trolley mascot and explained why we couldn’t ride around in a cool trolley that year. The story was probably intended to scare us into staying in our campsite at night. The story itself is pretty ridiculous, but it was the events that happened the next few days that made us think the story was true!

One of my friends, Roger, swore when we went to the bathroom that he saw the ghostly image of a trolley in the distance. Knowing him, he was probably just playing off our gullibility. Another boy said he heard in the middle of the night “Billy! Nooo!” Presumably another prank, but we decided that it was the ghost of the boy’s mom mourning over his remaining body. Poor Billy :(. The freakiest part for us was on the day after the story was told; we found a piece of a bandana along a hidden path to our campsite. We decided the bandana piece was from the creeper, who must have payed our campsite a visit the night before. Yeah… we didn’t sleep much the remainder of the week.

The story the scoutmaster told did its job: it kept us kids from venturing out in the middle of the night. It scared us and it scared us good.

blog comments powered by Disqus
© 2022 Seth Hendrick | Design By : BinaryTheme.com | Page generated on Thu, 22 Dec 2022 17:43:15 GMT | Opinions are Mine | Not affiliated with Boy Scouts of America
Posts on https://troop53stories.shendrick.net are licensed under a Creative Commons Attribution-ShareAlike 4.0 International License.