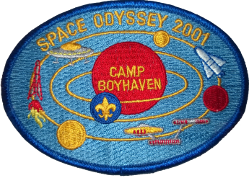 To keep in the spirit of scary camp stories, I decided to tell the tale of the Boyhaven Ink Blob. This story was told to us during my second, and final, year at Camp Boyhaven. Enjoy!

This happened many years ago after Camp Boyhaven closed for the season. Some camp counselors decided to go back and go swimming at the waterfront. No one was there, so they could do whatever they wanted. It was early morning when they snuck into the campground, and made their way to the waterfront. It was a few guys and a girl. They all jumped into the water, and swam out to the dock in the middle of the pond.

After a while, they notice a very dark patch of water. It looked like someone spilled ink in the water. One of the counselors decided to go and see what it was. He swims over, and enters the inky area of water. Once he does, he starts screaming and thrashing around in the water. He goes under, and does not come back up.

Another counselor thought the first counselor must have been drowning, so he jumped in the water and swam over. One he reached the inky area of water, the same thing happened: he started to scream in pain, thrashed around in the water, and went under, never to be seen again.

The blob approached the dock, and when it got close, it stopped and waited-daring the other counselors to try to get back to safety. The remaining four counselors came up with a plan. One of them would jump off the back of the dock away from the ink blob, and once the ink blob started to pursue, another one of them would jump off the other side and try to get help. The hope was the ink blob would be confused over which counselor to chaise, and they would both make it to safety.

And so, one counselor jumped off the dock and started swimming to shore. As expected, the ink blob followed him. Another counselor jumped off the other side of the dock and started swimming to the other shore. That’s when the ink blob split into two blobs. Ultimately, both blobs caught up to the counselor they were chasing, and they were both pulled under, never to be seen again.

The remaining two counselors had no idea what to do now, so they stared at the blobs as they recombined back into one. They both decided to wait until help arrived. Eventually someone would notice that they were missing. A couple hours passed, and the female counselor decided to lay down on the dock to work on her tan. Unbeknownst to her, her long hair was falling into the water. The ink blob swam over and grabbed her hair. The female counselor started screaming as the blob pulled her hair. The top of her head was pulled into the water, and that point it was game over. The ink blob pulled her into the water and consumed her.

Some say you can still hear the screams of the victims if you listen closely at the waterfront. Screaming to be freed from their inky prison.

Therefore scouts, do not go into the water when no one is around. You might be consumed by an ink blob of death.

The story was definitely told to keep us very young scouts out of the water when no adults were around. Needless to say, it worked. Many of us were scared to go in the water after that story.

I already didn’t (and still don’t) like swimming, and I think this story may have had something to do with that :P.

blog comments powered by Disqus
© 2022 Seth Hendrick | Design By : BinaryTheme.com | Page generated on Thu, 22 Dec 2022 17:43:15 GMT | Opinions are Mine | Not affiliated with Boy Scouts of America
Posts on https://troop53stories.shendrick.net are licensed under a Creative Commons Attribution-ShareAlike 4.0 International License.